There is a quiet though definite undercurrent rippling around at the edges of the mainstream architectural world right now. With Sustainable Architecture breaking through the whole architectural firmament, many, many more architectural practices are having to ask themselves questions about how exactly to meet both regulatory red tape and an incremental demand for sustainably informed design.

For mainstream architecture abandoning the stylistic and formal practices of the discipline for folksy hair-shirt purism isn’t really part of the picture. The aesthetics associated with the twentieth century, from classical modernism to post modernism, for the reflective and architecturally literate practitioner, don’t just disappear out of the window. Rather there are signs, at least in places, that a new ecologically smart variant of Modernism is beginning to configure, and evolve. It may be different, but, here’s the point, it’s Modernism none-the-less.

There’s the beginnings of a makeover in modernist materials, and while the mainstays from the twentieth century brick, concrete, steel, glass, plastics  aren’t exactly being jettisoned quite yet, the envelope is being pushed enough that sustainable materials, long perceived as cranky and marginal are much closer to a tipping point of acceptability by an increasing segment of the wider architectural community. Similarly, the pervasive dismissal towards architects who get excited by the question of using the perceived constraints that environmental design places on itself as stimulating opportunities, is beginning to be looked on with new credibility. Such sustainably intelligent design has been accomplished as much by stealth as it has didactic finger wagging. Suddenly the architectural world is seeing increasing numbers of interesting, elegant buildings, which speak a Modernist vocabulary, but which have been built from materials traditionally far from the tradition: Visible Modernism, invisible sustainability.

This has been, up until recently, very much part of FeildenCleggBradley Studio’s mission, their buildings generally being exercises in restrained Modernist volumes, clean orthogonal geometry, and a purity of form, though always executed with the ecological designed process clearly in mind. Sarah Wrigglesworth has also contributed to this renegade aesthetic strand, with her Straw Bale House in North London, a useful piece of dramatic novelty. More conventional, though also interesting is their recent science and ecology DFES Classrooms of the Future funded building for Mossbrook school on Sheffield’s outskirts. 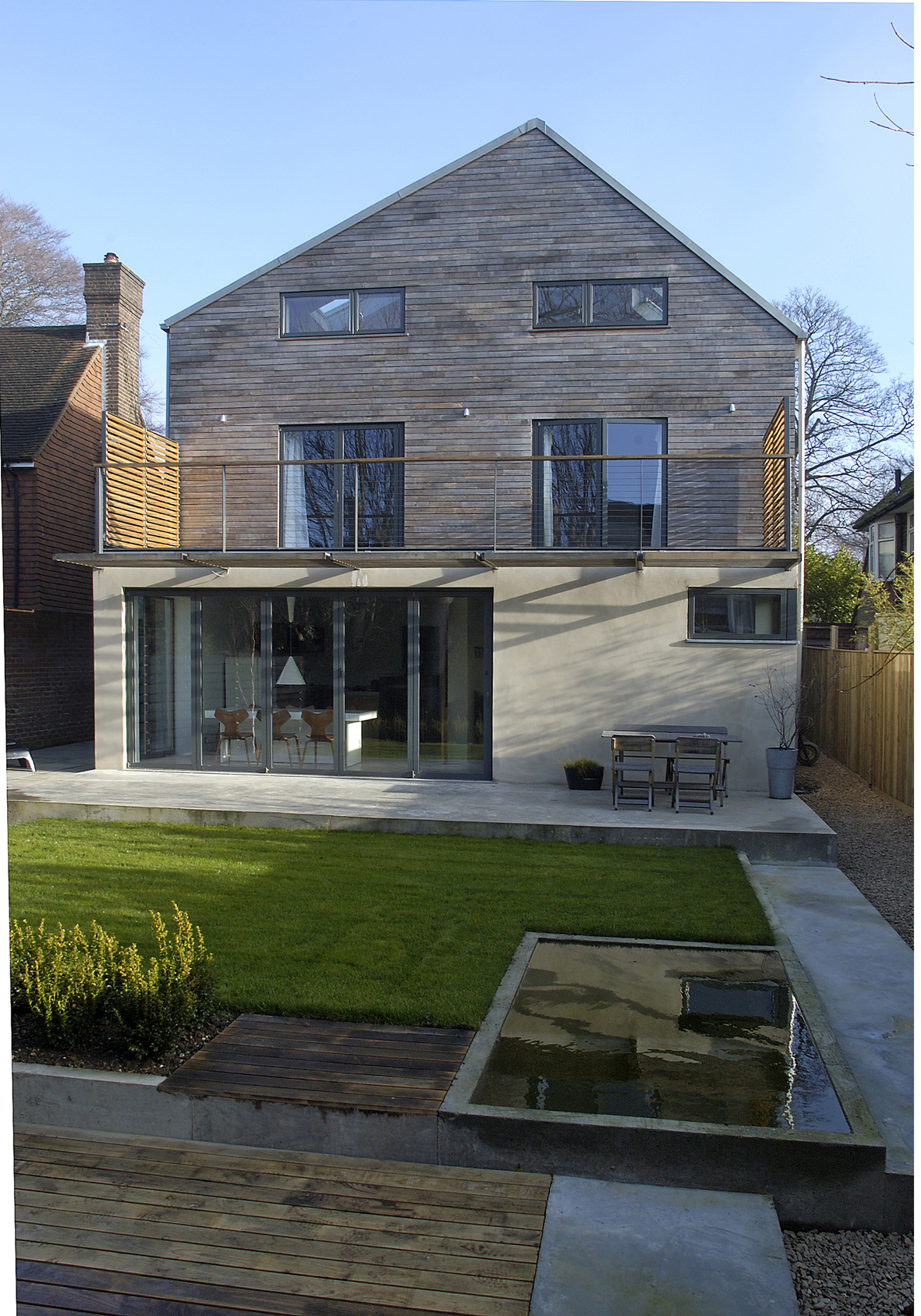 Another practice who can be included in this emergent tributary, is Sussex based, BakerBrownMcKay Architects (or BBM), which in the last year have seen their practice workload take off, with five or so buildings completed and launched during that time. Last autumn The Independent’s architecture writer, Jay Merrick visited their recently completed residential house in an uptown part of Brighton, and easily persuaded, proclaimed the arrival of Eco-Cool; stylistically recognisable and therefore attractive, accessible and affordable to a middle-income bracket. The building looked unmistakably modernist, yet was built from sustainable materials; raw clay plasterwork, laminated bamboo paneling, organic paint and sweet chestnut cladding and joinery. This cool, almost sexy, architectural literacy speaks to middle class clients in a way arguably more radical but inaccessible eco-buildings just didn’t, and don’t. With the build-cost at £250 000 Merrick wondered, not unreasonably, why such an eco-architecture couldn’t be just as suitable for town-centres, suburbs and villages? 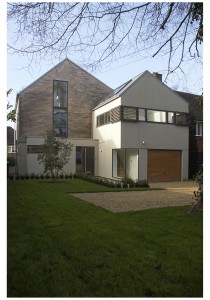 Duncan Baker Brown, one half of BBM, outlines their minority position, stating that there still “aren’t enough talented architects interested in tackling ‘green’ issues. Too many architects think it is not their responsibility. Britain’s most talented architects appear to be interested in form and surface: they are not bothered where a material has been transported from or how it was managed/mined. At best they will make sure a building is well-insulated with some prominent solar panels on the roof. BBM, he continues, “believe that architecture needs to be aware of contemporary culture to be relevant and appropriate, but are trying to find ways of doing that without perpetuating or encouraging further destruction of the natural environment”

“I think”, he adds, “that architecture with a preoccupation towards being ‘green’ or whatever is still very much in its infancy: it’s only just emerging.”

Along with the Brighton house, BBM’s busy last eighteen months have included several other eye-catching homes, in and around the Sussex county town Lewes. Along the coast in Hastings, the Bridge, a community centre set among the Hastings hilly outskirt post war estate developments, has just opened its doors; and a new media centre refreshing the downtown Hastings streetscape is also recently occupied. Also in Lewes is an extension to a primary school, clad, unusually, in home-grown Cornish cedar shingles from the Cornish Duchy Estate sourced from Cornish Woodland. The cedar shingles cladding freshly completed on the St Pancras’s front facade. In the front the nature garden

All of these bear the BBM preoccupation with local materials, and the new builds (the Media Centre is a rebuild) adaptive use of traditional timber frame skeletons, which is then built upon using, as much as possible, the most locally available materials. What is making this increasingly easier are the procurement routes, “the changes have been mainly to do with being able to use genuinely local materials with good green credentials. This wasn’t possible ten or even five years ago.” He feels that their best work in this field is only just beginning, because of this newfound availability replacing those with much more burdensome ecological footprints, including some with “huge air/road mile components”. Reaching for a metaphor, Baker-Brown likes to see what BBM are doing as akin to slow building, using locally sourced, organic, replenishable or very durable materials such as stone, brick, comparable to slow food, rather than the mainstreams fast-food architecture. The recent spate of buildings, display a particular locally Sussex grown material coming into its own; sweet chestnut, which is now being manufactured locally by In-Wood Developments. This prolific though otherwise underused crop is being given new work, in the form of cladding, joinery, and at the Bridge, glue-laminated beams. (For a closer look at sweet chestnut as building material see the accompanying Annular piece) Their use, assists regional biodiversity as their quick growth (25 years) means other trees, such as oak, can be preserved to complete their full grow cycle. Produced from local Sussex and Kent coppices, these new uses for a low-grade wood, otherwise destined for fuel pellets, is being taken up by a number of regional architects. The Bridge, a community centre – so called because of a linking bridge between pavement and building – arguably shows off these woods to best effect, both with its cladding, and a system of glue-laminated beams which comprise the three storey structure post and beam timber frame. Baker Brown knows there’s a way to go to bring down the ‘ecological footprint’ to levels he views as ideal, but he also can see this as introducing the ingredients for a revived local vernacular. For those who see ecological architecture’s best chance of wider influence as developing both its own tradition and aesthetics, gestures towards regionalist modernism are one starting point. That’s a long way from International Architecture and its homogenized materials, but there again it may be timely, given Modernisms current rehabilitation, as a strategy to revivify and reinvigorate it in the early twenty-first century.

A version of this piece was originally published in Building for a Future vol 15, no 4, Spring 2006, and documents my Lewes architectural colleagues, Duncan Baker-Brown and Ian McKay’s, use of chestnut from local sources for cladding and in their Hasting’s project, The Bridge for glulam structural uses.