Lauder College sits off a roundabout on the edge of Dunfermline, a town a few miles north of the Forth Bridge and Edinburgh. It is typical sixties concrete-box educational build, a legacy highlighting the mix of the poverty of imagination and that of budgets from the last era of big educational building programmes.

The architects are the Scottish, International practice RMJM’s, referred to, in the city, as ‘Rumjum’s. RMJM are the architects who have the invidious position of being the practice who got into such a mess with the Edinburgh Parliament, and continue to be controversial in their naked pursuit of huge commercial projects stretching from Moscow to Dubai, making them one of the most commercially successful of Scottish originated practices. The tremors of the Scottish Parliament scandal continue to echo, both politically and within the architecture scene. The building though – the creation of the Spanish architect, the late Enric Miralles and his wife, Benedeta Tagliabue – looks fantastic, and much wood is used for dramatic effect. It was RMJM – with in-house expertise in sustainable architecture and as BREEAM’s regional Scottish agents testing – who delivered the Parliament building’s sustainable credentials.

EcoSpace is RMJM’s next timberbuild, but to say it is different is a dramatic understatement. Go to the other end of the spectrum, to functionality, and simplicity of design, and you’ll get the picture. There is little connection beyond chronology; instead the office points to a previous timberframe the office worked on for the Scottish Pensions Association in Galashiels, about three years ago, as informing this new design. Where Galashiels was given a Breeam Very Good mark of quality, the aim is excellent with ECOSpace.

Part extension, part discreet and separate building, EcoSpace wraps around the south of the college, in effect an extended L. At a cost of £2.4 million it isn’t a cheap investment, and one quickly realises that pretty much all the eco tickboxes have all been assiduously filled. Sitting some four to five metres below the adjacent playing field and car park while level with the older building, required extensive excavation. The vertical axis consists of six new workshops, while the horizontal line comprises the ASPIRE centre, originally the focus of the project; a dedicated learning space for working with adults with learning disabilities and also those with physical disabilities. The unit aims to help nurture self sufficiency, so one room imitates a real bedroom so as to develop relevant home living skills. At the front this section an organic cafe is planned. 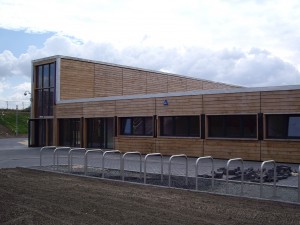 The workshop spaces are intended as a showcase for what the college does, highlighting sustainability. Lauder is one of four sites across Fife, with a follow-through sustainable agenda as a stated strategic aim. Experience of the spaces is also intended as learning and teaching tools, providing clear and simple examples of carpentry and building processes, right there in and around the workshops. The workshops themselves consist of 2 joinery (145m sq), plus 1 wood working machine room (130m sq); 1 joinery (145m sq); 1 painting and decorating room (125m sq) a furniture workshop (60m sq) and furniture cabinet room (130 m sq.) There is also a furniture restoration room. Each of these is accessed by the main corridor, running the length of the building and dividing the newbuild from the immediate older sections of the college, also in the process of being revamped. The corridor, originally planned to reach out at the entrance, is the visual centrepiece of ECOSpace’s timberbuild ambitions, 25 post columns and beams stretching the sixty metres of the building.

Originally designed as a two storey, the ASPIRE section requirement for full access meant a rescaling to single storey, lowering the energy needs. While the brief outlined using as much locally sourced timber as possible, the result has shown the limits of availability of larger oak timbers in Scotland. Although Douglas was used for the columns, glulam makes up the beams, all exposed in each of the workshops. Also left partially exposed are the dust-sucking ducts, which clear the air of each of the workshops of sawdust and other woodwaste.

Externally, green oak cladding is varied between vertical in the centre, and horizontal to the side of the build. The oak had to be sourced from England, and even France, after the shortfall of Scottish green oak was realised. The cladding will remain uncoated apart from a non-toxic fire retardent coat. Inside OSB joins the walls to the columns. The RMJM architects describe the detailing as simple and honest, expressing the building at every turn. Certainly the beams and columns are clearly visible, as are the walls, so that the detailing is accessible to anyone visiting, and more immediately relevant to those working in the workshops.

Completed by the Scottish arm of Carpenter Oak and Woodland the specialist bespoke carpenters, for whom according to COW’s, Scott Fotheringham this was the most ambitious timber-engineering contract since Page & Park’s Inverness Maggies build. Given that all the timberwork is visible there was little or no room for error, with both timber and carpentry needing to be completely accurate. When the trusses were crane-lowered in, each beam slid in, inch for inch. Form in this instance quite definitely follows function. 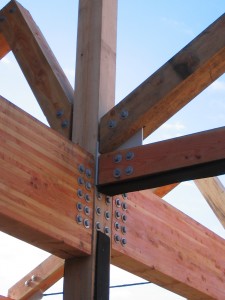 Other parts of the sustainable brief includes good natural light, pouring into each of the workshops through the north face of two of the three saw tooth roofs. The first of these, at the south facing front end, is ramped up with nine See Can solar panels. The main windows are Velux, while for the larger vertical windows, NorDan was specified. These are all linked to a Building Maintenance System, while heating is also automatically controlled. Parts of the roof are to be bedded with sedum grass, and rainwater run-off is harvested. Flooring is primarily linolium, organic paints have been used internally, as has natural wool insulation. 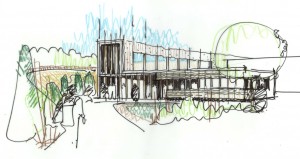 If the inability to procure native oak is instructive, ECOSpace still provides an interesting mainstream instance of how timber and sustainable agendas are fusing. Their powers of persuasion helping to convey aspects of the message to the very people who have much to benefit from it: future carpenters, joiners and others who will make up the next generations of those working with wood.

This is a version of a piece which was originally published in part 1 of the three part series on the return of timber to Scottish building and architectural culture in Building For a Future vol 16 no 2, over the winter/spring of 2006-7

For the other in this series of pieces see part 2, Timber and the new Scottish regionalism and part 3 Return of the Forests, Scotland’s timberbuild r & d